The Timber Depot in Dandeli presents a feast for both bird and birdwatcher, and then some rumination If a man walks in the woods for love of them half of each day, he is in danger of being regarded as a loafer. But if he spends his days as a speculator, shearing off those woods and making the earth bald before her time, he is deemed an industrious and enterprising citizen.
– Henry David Thoreau

The Timber Depot at Dandeli is a living graveyard, if that oxymoron makes any sense. It stands right in the heart of this sylvan north Karnataka town, which the virile Kali river cleaves in two as it hurries to the sea about a hundred kilometres away at Karwar. One hot afternoon in April, we crossed a bridge over the river (gawking at the heft of an enormous marsh crocodile basking on an islet) and arrived at the timber depot. We had barely entered when it struck us that this place had more hornbills than we had collectively bargained for.

It also struck us that the Karnataka Forest Department, like forest departments everywhere in India, exists for the primary purpose of generating revenue from natural resources. For everything else besides timber was an aside, not even meriting a rounding error in its account books.
In the timber depot large trees, bare of leaves but laden with rotund yellow fruit, stood like fairytale giants, their tentacled fingers stretching skyward. At their feet lay corpses of their kith and kin, their sawn trunks stacked in neat heaps on the dry earth. From towering living things they had been degraded to commodities. Now they were known as rosewood, jackwood, teakwood – wood being the operative suffix.

The evening light softened the mood, lending to the recumbent logs a sobering burnish. Above me, the canopies were aflutter with so much avian activity that I had trouble deciding where to look. We were just recovering from the surfeit of Malabar Pied Hornbills, which were ubiquitous, and gazing with satiated boredom upon flocks of Malabar Grey Hornbills. Glossy-black male Asian Koels and their speckled mates, White-cheeked and Coppersmith Barbets, Plum-headed Parakeets, Pompadour Green Pigeons and Chestnut-tailed Starlings feasted on the cornucopia of yellow fruit, barely shuffling at the disturbance caused by our gawking selves.

Against the relentless symphony of cicadas an Indian Roller sallied about, flaunting its brilliant cerulean hues in vain as we ignored it for the hornbills. A troop of Hanuman Langurs, comprising overgrown adult males, subadults and females with infants, pillaged the trees of fruit and leaves. Giant squirrels stuffed their mouths. Mynas and crows hung around, unable to resist the opportunity to dig in.


What was this manna that got the entire animal kingdom in raptures, I wondered. I picked up a fallen fruit and bit into it. It was tough-rinded but juicy, not sweet but leaning towards sour, and otherwise unremarkable. It left an acidic aftertaste. I spat it out.

Yet, with so much to behold, the trees and their supine carcasses haunted my thoughts. Did this charming evening spent at this necropolis signify something more: perhaps the oncoming eventide for all of our great old-growth forests and their guardians, the hornbills? As my eyes wandered about the yard, I picked out signs of humanity – the gaudy saris of women ambling down the depot’s main thoroughfare presented hopeful hues against the sombre dullness of the trees, and I saw the simple joys of companionship in the resigned contentment of an elderly couple using a hefty log as a park bench. 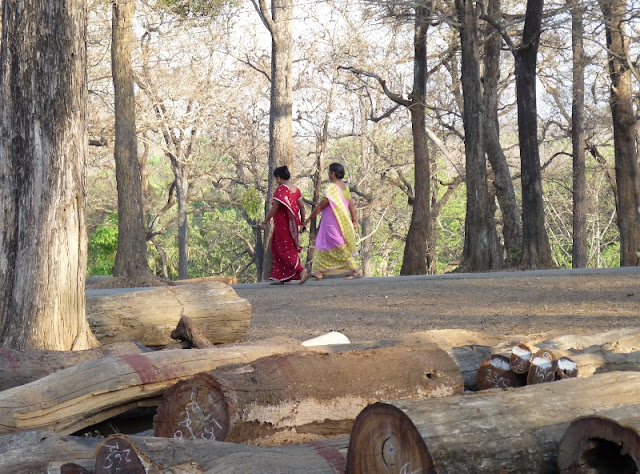 Perhaps this forest represented much more than it actually stood for – it was a landmark of nature’s resilience, her unstinting will to push on in despite the looming spectre of imminent loss that the great darkness of human civilization would inevitably bring. And then, after our time, perhaps the forest’s soul shall be rekindled again, gilded by the hopeful rays of a new sunrise. We bade farewell to the sleeping logs before sunset as the sounds of the great feast echoed behind us — the last suppertime squabbles of the hornbills and the frantic whoops of the langurs as they settled domestic tiffs. There is still a good hour to go before lights out, the birds seemed to think. We might as well eat.

The sleepers that lived and died wait, the far advanced
are to go on in their turns, and the far behind
are to come on in their turns,
The diverse shall be no less diverse, but they shall
flow and unite
–they unite now.
Gluttony in the Timber Graveyard from Green Ogre on Vimeo.


From Sleepers by Walt Whitman