Driving into Jayamangali just shy of sunup, we had expected the biting December cold to rattle our bones. Instead, through rolled-up windows, we were comforted by the sight of auburn grasslands bathed in winter sun.

Planning this trip had been half the work. Do we drive out of Bangalore at the crack of dawn? Do we camp overnight near the sanctuary? Do we just get there at night and spend the night in the car? The three of us eventually found an iffy lodge in Gauribidanur, about an hour’s drive away, and spent a not-so-restful night there. We were on the road again just after five, preferring to consult local knowledge to navigate to our destination over the lopsided wisdom of Google Maps.

Mustering the courage to wind the windows down, we were greeted by the music of the grasslands — they reverberated with the chorus of Grey Francolins, Indian Silverbills and prinias — Plain, Jungle and Ashy.

Red Turtle-doves and Eurasian Collared-doves, along with Laughing Doves, foraged on grass seeds on the dirt road ahead of us. Larks rose from the ground — there were Ashy-crowned Sparrow-larks, Rufous-tailed Larks, Jerdon’s Bushlarks and Oriental Skylarks. Large Grey Babblers kept up their constant complaining, while Bay-backed Shrikes stalked the meadows in pursuit of breakfast.

And then, we found that we were being watched. A handsome dark-flanked buck in all his alpha-male splendour surveyed us with habitual suspicion. Spiralling horns held aloft, muscles rippling under his glistening coat, he watched us through the sun-gilded grass that concealed him until his waist. He was a portrait of heart-stopping beauty.

Really, was this the animal that Salman Khan set out to shoot? What was he thinking, if at all he was? What good was this fine beast dead and gutted and reduced to a petty trophy on a wall? Balancing the car on the rutted dirt road and stalking the blackbuck through my camera’s viewfinder, I felt like a bit of a trophy-hunter myself.

The bucks, though aware of our presence (and of other wildlife enthusiasts like us who were admiring them from their cars), had more pressing politics to settle. A handsome blackbuck, his dominant-male status given away by his stiff, upright gait and his cocked tail, seemed incensed by the challenge from a youngster. The tawny-coated, barely-horned upstart was not yet in his prime, but hormones powered him to dastardly risk-taking. He rattled horns with another adult male. At first it looked like friendly sparring but things quickly escalated. They jousted, unmindful of the rapt audience watching them, and didn’t stop even when an impatient visitor honked his horn. 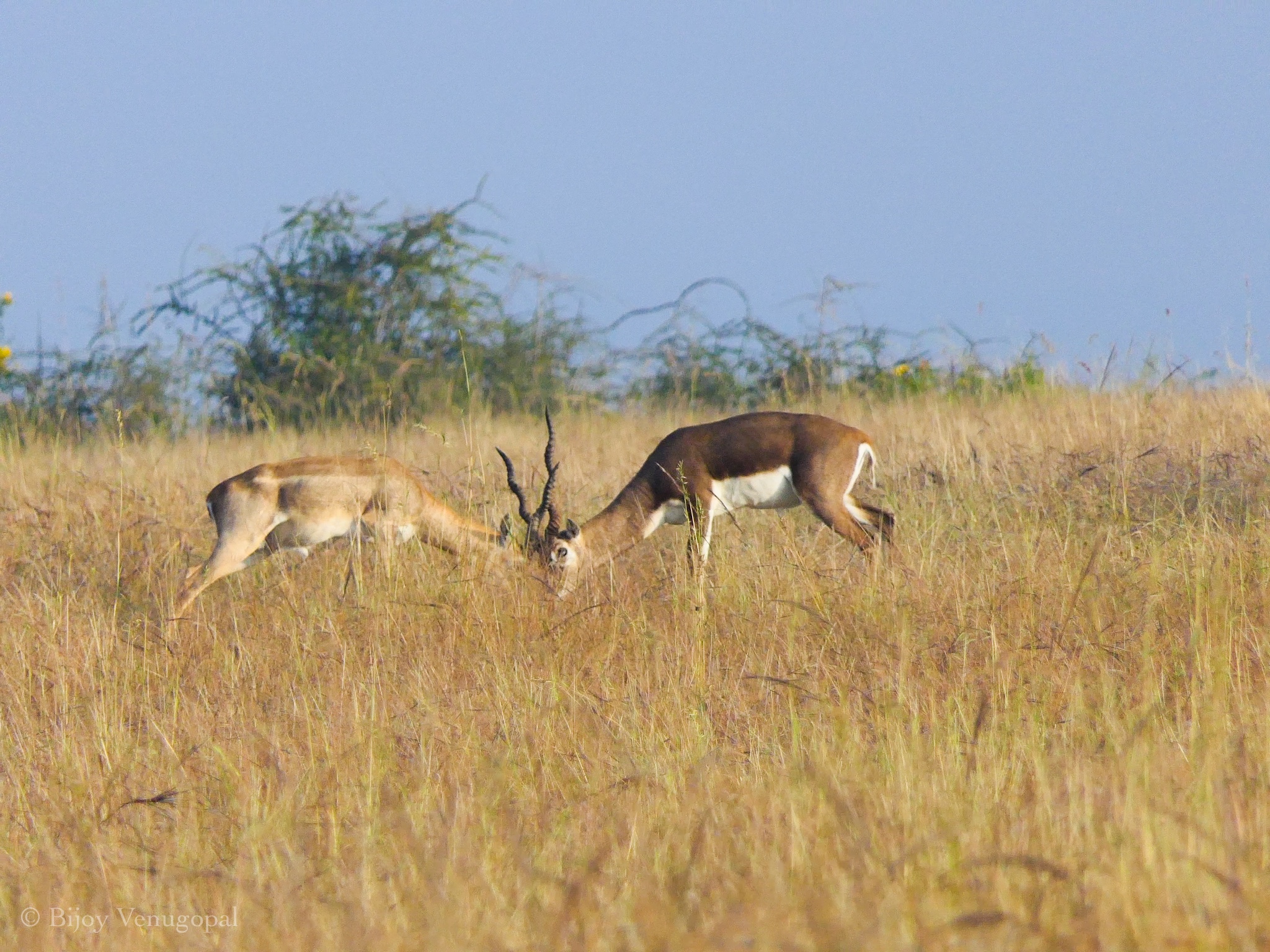 Stopping for breakfast in a field adjoining the sanctuary, we saw that these graceful antelope didn’t care much for human-drawn borders. A herd of ten or more does and fawns, led by a single buck, loped with abandon among the croplands of jowar and millet.

For birders like us, there was ample distraction. A Pallid Harrier hunted prey amid the stalks while a trio of Oriental Honey-Buzzards and a female Kestrel also kept watch.

While we admired the blackbuck at home in these fine grasslands, our thoughts drifted to the fragility of it all. There are cattle grazing in the sanctuary and packs of feral dogs have replaced wild wolves as the biggest threat to their survival. Poaching is an equal concern.

After spending a few hours at Jayamangali, we drove onward towards Madhugiri, one of the largest monoliths in Asia, and birded at a wetland nearby. Along the way we passed more fields of jowar and millet. We kept our eyes peeled for more blackbuck, but saw none.

One thought on “Among the blackbuck of Jayamangali”