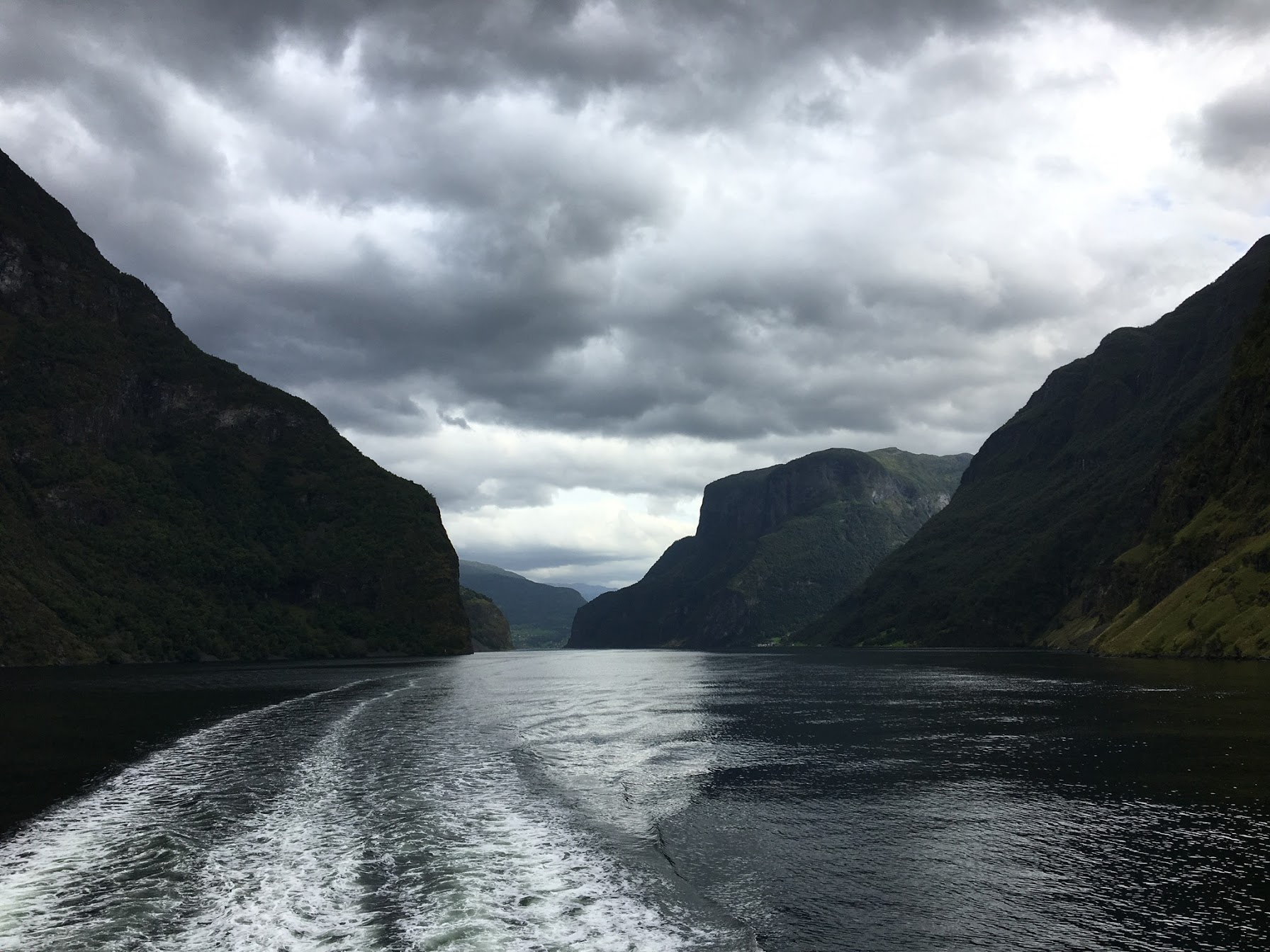 A few months earlier, Roland Huntford (Scott and Amundsen – Race to the South Pole) and Neil Gaiman (Norse Mythology) had sold me the idea of a Norse sojourn* (see notes below).

A flight and two trains later we were at Flam. Our train journey from Oslo to Flam was a crash course in geography. Our train made its way along farmlands, lakes, mountains with views of mountain passes, glaciers and waterfalls. We experienced alternating weather patterns of overcast, rainy conditions and bright skies with piercing sunlight. Starting our journey at less than 30 m above mean sea level at Oslo, our train ascended to 1,222 m above sea level at Finse and eventually descended to under 30 m above sea level at Flam.

I am a firm believer in the journey being the destination and will count the train journey from Oslo to Flam as one such destination. That list was to grow as we took the cruise boat through Songnefjord. 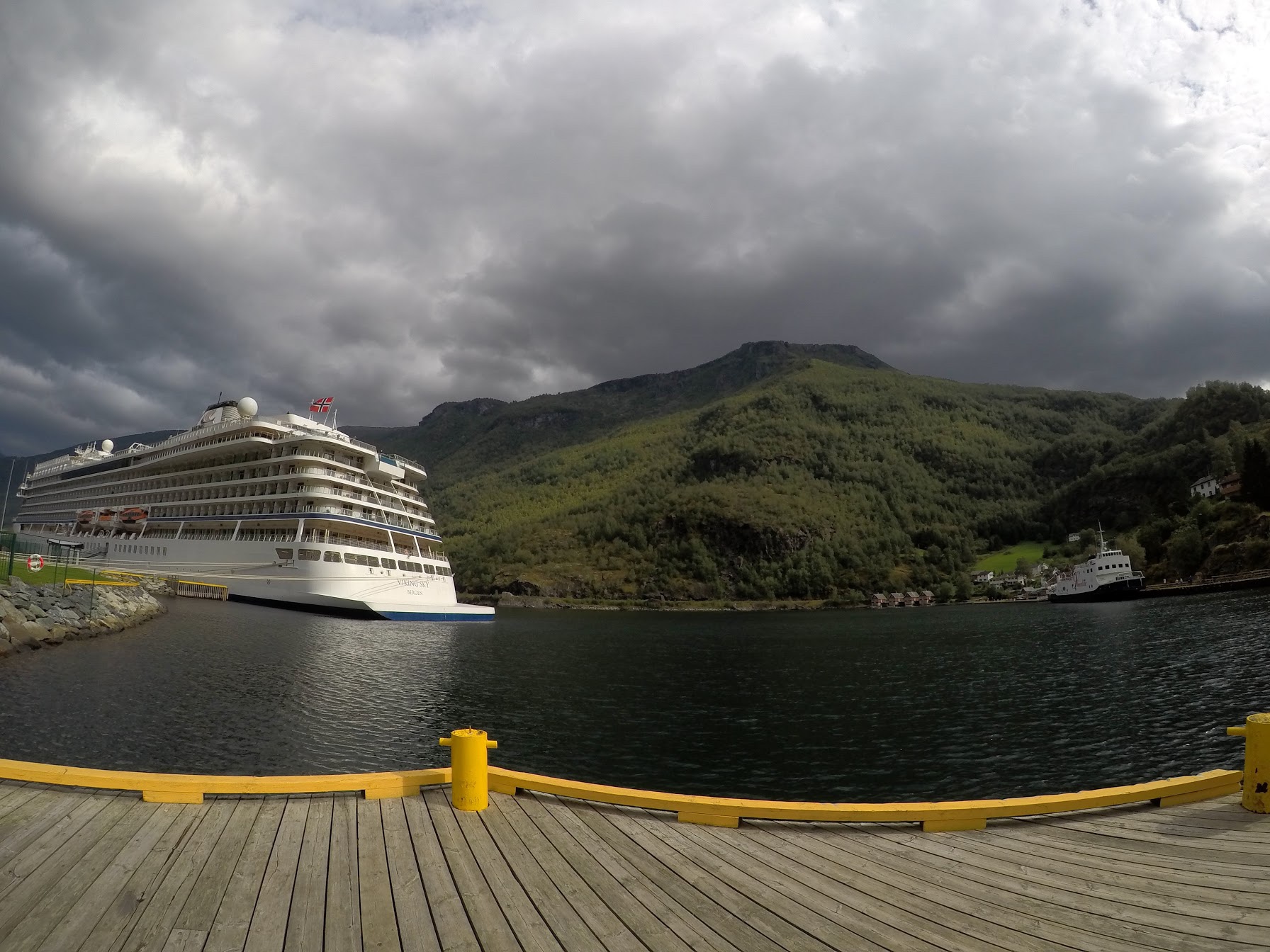 Our train dropped us at Flam station a little after 1 pm. Flam Harbor is about a hundred meters to the north of the Flam Railway Station, but we had about three hours before the fjord cruise departed for Gudvangen.

We needed three hours to take in Flam. The afternoon sun was shining bright as we got off at the Flam Station and there was an occasional cool breeze lifting off the surface of the cold Sognefjord and travelling shoreward. This alternating warm and cold worked as a massage both physical and mental.

An imposing Viking Sky cruise ship was docked at the Flam Harbour. But Flam sets right the proportions of size. Flam is a crucible surrounded by mountains on all sides. Aurlandsfjord, a branch of Sognefjord which extends like a tentacle towards Flam, looked like a lake, which ended at the foot of the ridge ahead. But this was an illusion, for the Sognefjord with its serpentine branches extended westward, eventually meeting the North Sea. 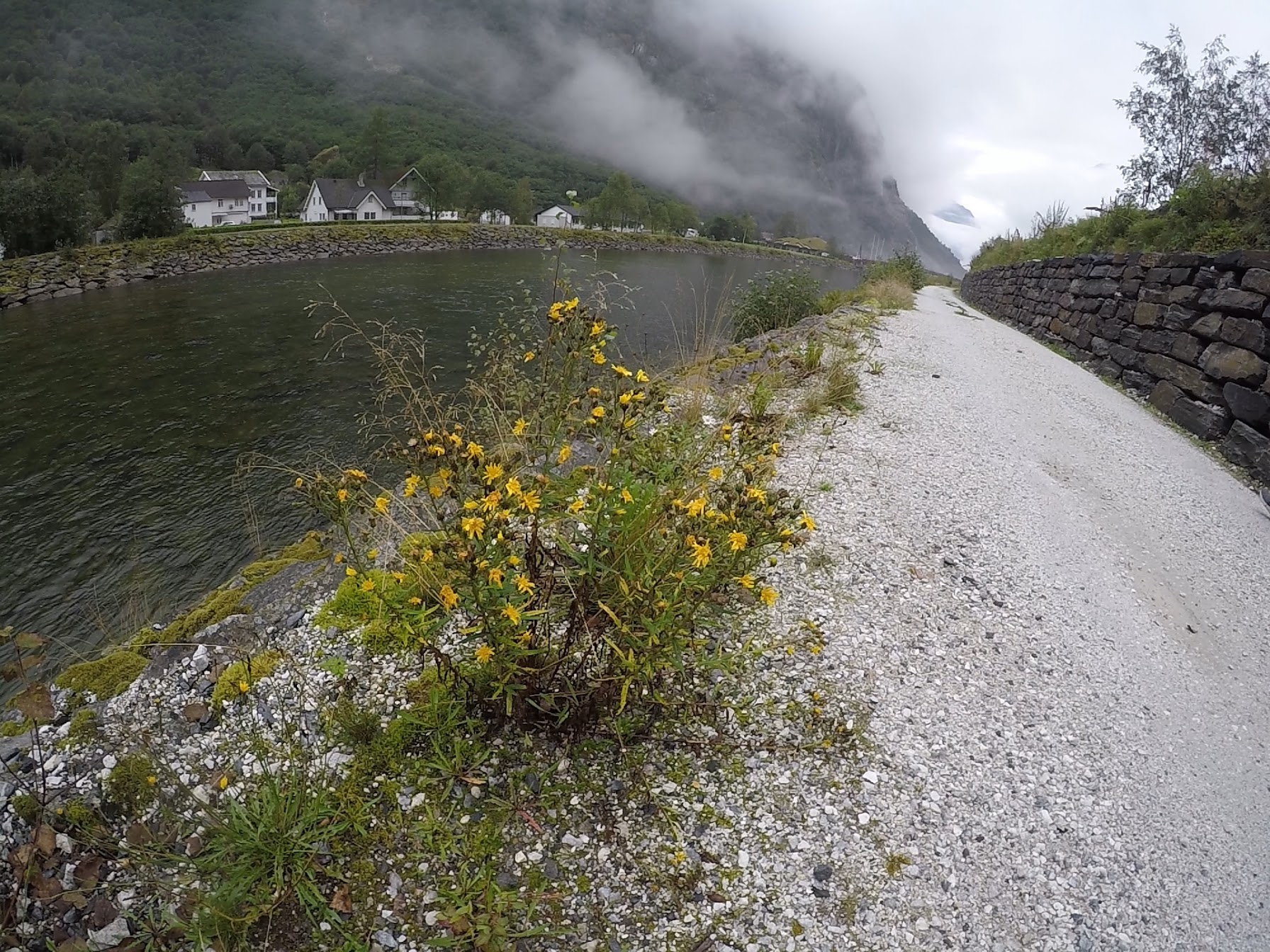 At 4 pm we boarded the cruise boat to Gudvangen. It was a hard choice to decide between the lower deck, the middle deck or the upper deck. We took the middle after boarding from starboard. Anchors aweigh! The feisty cruise propelled northward on the Aurlandsfjord.

In hindsight, the middle deck was a prudent decision, for access to the upper deck on the side of the bow was blocked with a rope as it was just above the bridge. However, the middle deck, which was just below the bridge, offered a vantage mildly inferior to that of the captain’s. 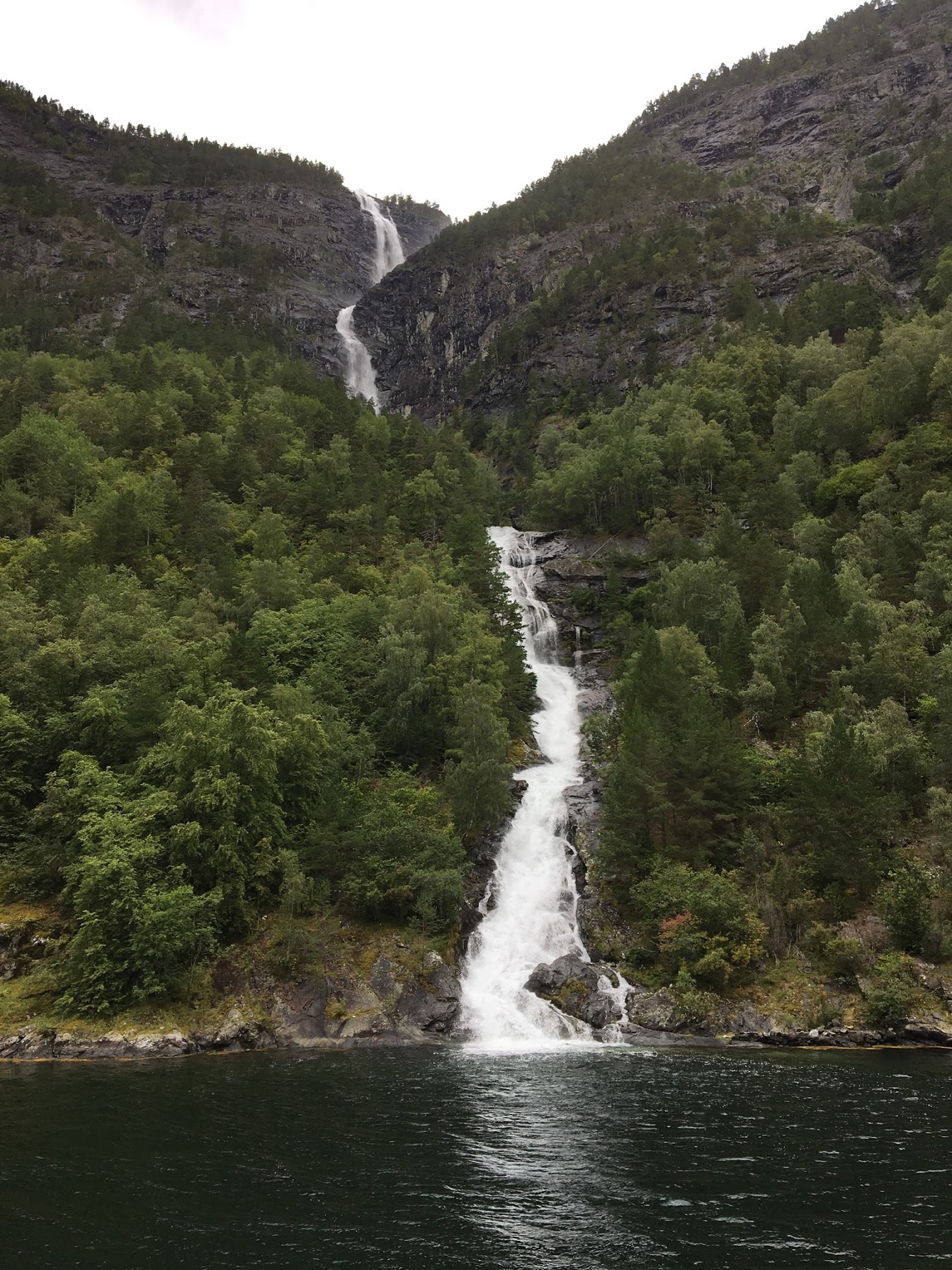 We sailed down the funnel constricted by tall mountain walls on both sides. Settlements appeared and disappeared, some at the waterline, others high up on the cliffs, leading to the question in the mind, “Just how do they manage”?

A moot question, for everyone knows, from the Andes to the Himalaya, from the Rockies to the Alps, the hardy hill people on any continent are made of a different mettle.

Within minutes, the bright blue skies turned gray. The wind-in-the-hair experience started to feel like a chill-in-the-bones experience. The mild discomfort was worth the satiation of looking ahead into the fjord that kept extending though it always appeared that the next mountain wall would be the end of it. 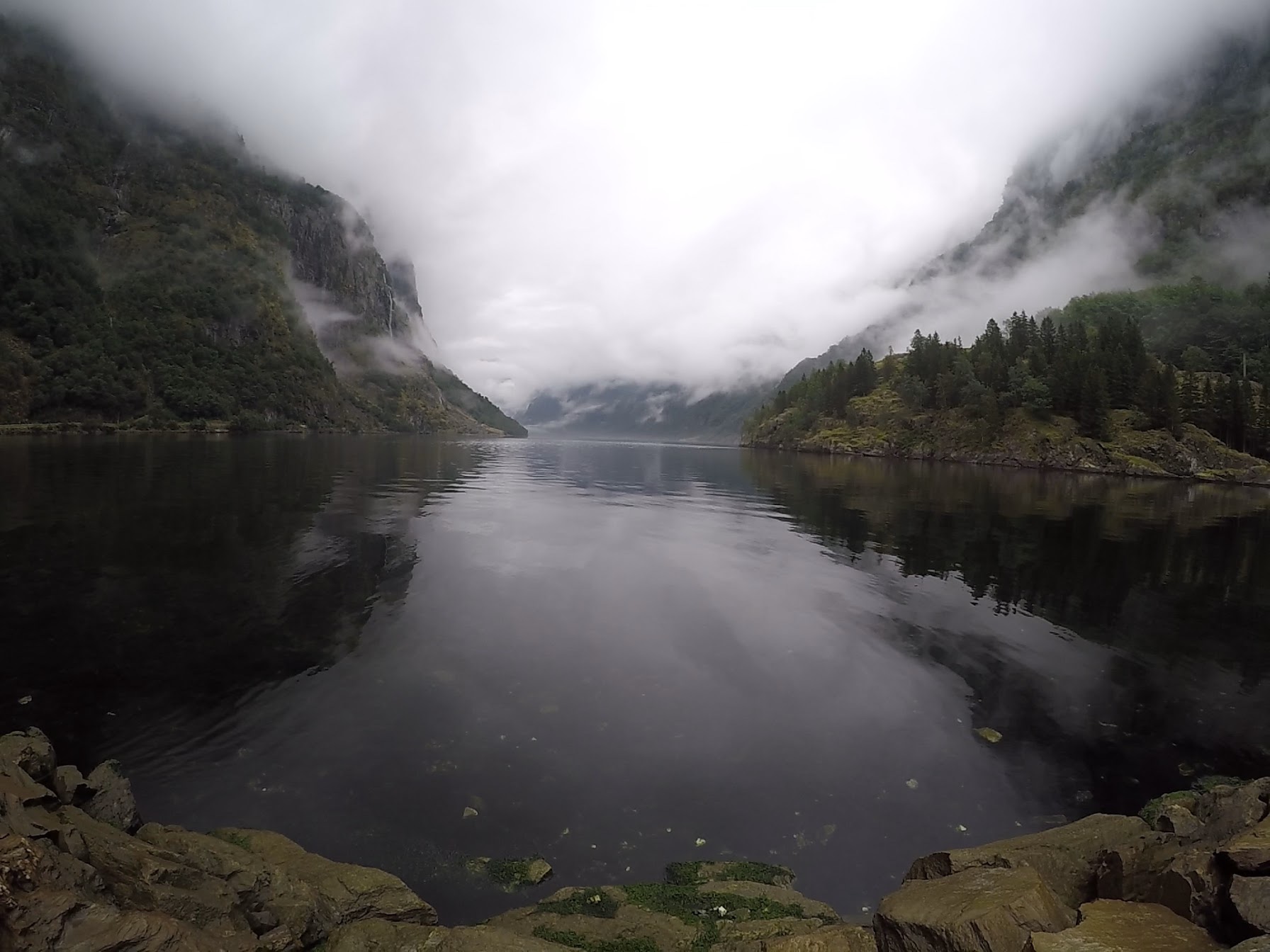 About three quarters of an hour into the cruise we came very close to the mountain wall straight ahead and the fjord curved left at almost right angles, revealing yet another seemingly endless journey. After ten minutes, we came to a fork, the right branch of which led to the parent Sognefjord and the left branch led to the Naeroyfjord, a UNESCO World Heritage site in Norway.

Aurlandsfjord and Naeroyfjord form an inverted “V” which meant that we were headed back south. By now the clouds were thicker and the winds stronger and the fjord narrower. The Naeroyfjord, which translates to narrow fjord, gets its name from this slender shape. The name hides the fact that it is one of the deepest fjords in Norway and hence its listing as a UNESCO World Heritage site. The fjord’s depth is also a function of time, one spanning aeons, gradually eroding the bottom of the valley creating a trench half a kilometer below sea level.

Close to 5:40 pm we stopped to watch a waterfall, which seemed like it was coming down from the sky, for such was the height of the mountain wall it fell from. A little ahead, something bobbed out of the water. It could be a fish or flotsam, I thought, and I was sure it was surely not a cousin of Nessie. One can find ample evidence of sea dragons in Norse folklore, though none have been reported in any journal of science from what I know.

The first mate announced that we would soon arrive at our next stop, Gudvangen. I noticed a camp, probably set up by kayakers, on the left bank of the Naeroyfjord.

We disembarked at leisure since we were going to stay the night at Gudvangen. We saw most travellers spend less than 20 minutes, just enough to get from the docking pier to the bus station a hundred meters away. I was not surprised by this itinerary, for Gudvangen doesn’t hard-sell itself, but for its name.

Tucked away between mountains and a fjord, cloaked in thick grey mist and cloud, Gudvangen can be described in many ways. Like any mountain location, it has massifs with jagged edges, stoic ridges and towering peaks, which perhaps gave rise to legends of giants and trolls.

A riot of colours was amplified by the slanting rays of the sun, dulled momentarily by rainclouds, then brought back brilliantly by the wind chasing away the clouds.

As we took a walk around Gudvangen, the light mountain air mixing with the bloodstream offered the elixir of youth. The gushing cataract in the distance applied a low frequency aural detox. The abundant water nourished a vegetation which splashed green all over, soothing the eyes, and to break the monotony there were spots of eclectic wildflowers. 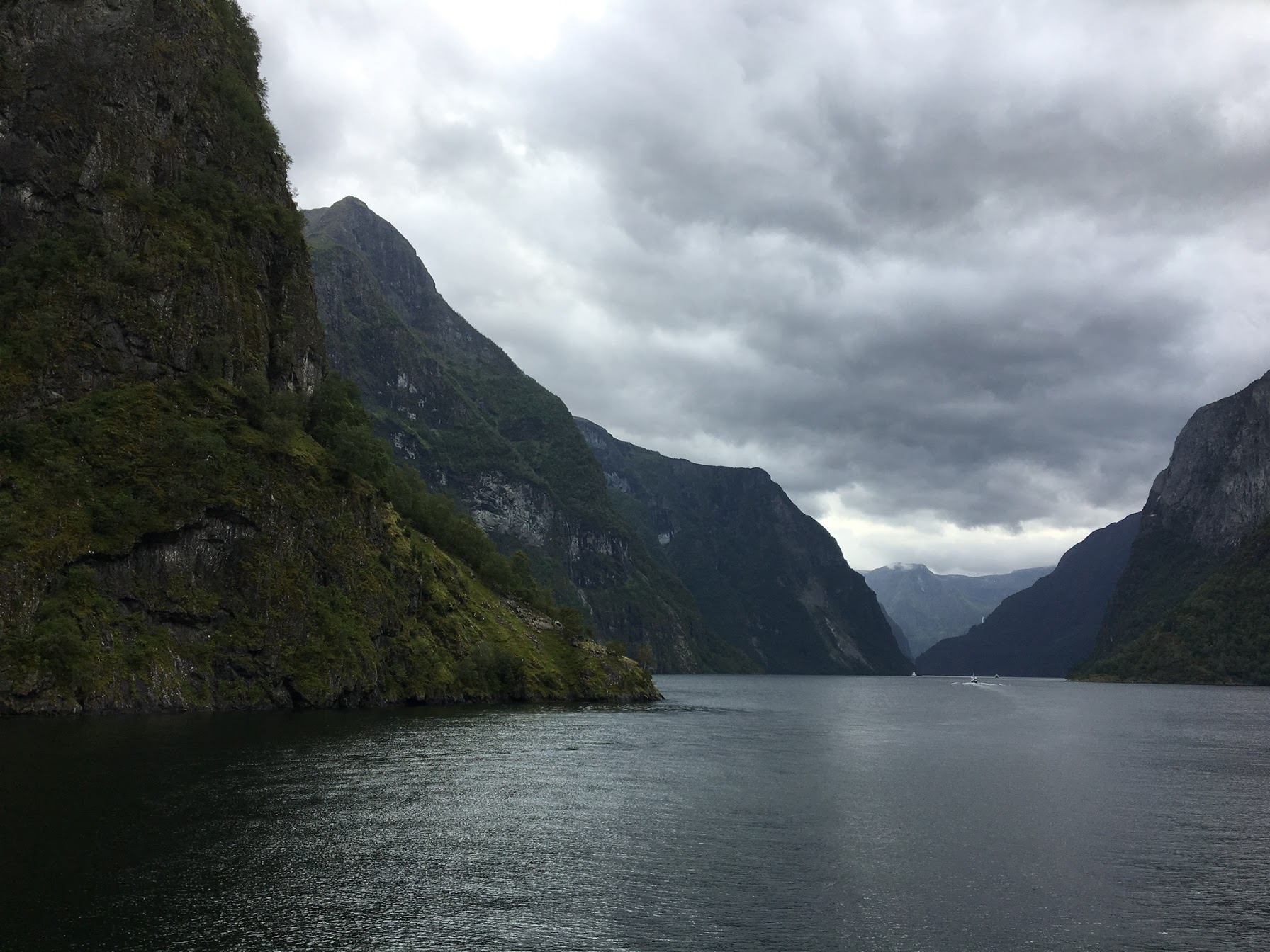 We reached a suspension bridge near the Viking village and as we looked upstream onto the Naroydelslvi river, a head bobbed up. A solitary mink (Neovison vison) made its appearance and scouring for its snack along the rocky embankment of the river. Aware of our presence and emboldened by the fact that I only had a GoPro on me, it scurried and swam under the bridge. Reappearing downstream, it climbed on the rocky embankment again, standing up on its hind legs, head held high. It eventually disappeared into the depth of the river.

Was this God perhaps, I thought? For we were at Gudvangen “where the gods live.”

Steven Tyler began singing in my mind: ‘It’s amazing… life is a journey not a destination, and I just can’t tell just what tomorrow brings!’

Many years earlier Douglas Adams (Last Chance To See) had tried too, with his lines: “If you took the whole of Norway, scrunched it up a bit, shook out all the moose and reindeer, hurled it ten thousand miles round the world and filled it up with birds then you’d be wasting your time, because it looks very much as if someone has already done it.”

Adams used the parallelism to describe Fiordland in South Island, New Zealand. While Adams was trying to describe New Zealand, his message was clear: Leaving aside the flora and fauna, the landscapes of Norway and New Zealand were nearly the same. And Norway was closer.

Andy
Andy grew up watching nature documentaries. He indulges in reading and travelling to feed his interest in nature, history and culture. He is easily thrilled by trivia, anecdotes and conversations. Writing lets him bring his passions together.

In his day job, Andy defines cloud solutions and, in his spare time, he builds castles in the air about his next trip to an exotic destination, settling in the end for something unobtrusive and amenable to his budget.

Latest posts by Andy (see all)

Andy grew up watching nature documentaries. He indulges in reading and travelling to feed his interest in nature, history and culture. He is easily thrilled by trivia, anecdotes and conversations. Writing lets him bring his passions together. In his day job, Andy defines cloud solutions and, in his spare time, he builds castles in the air about his next trip to an exotic destination, settling in the end for something unobtrusive and amenable to his budget. View all posts by Andy